There’s been a lot of work on new poles and underground cable in the median dividing Chestnut Expressway in front of the RDI Building over the past few months. The poles support traffic cameras being installed as part of the City of Springfield’s new Traffic Management system, designed to improve traffic flow, reduce greenhouse gas emissions and enhance driving safety along major streets and highways in Springfield and along Interstate 44 through the region.

The new 11,500-square-foot facility was built and equipped for $3.2 million, with about half of that cost coming from federal earmarks and the other half coming from state and local funds. It is a partnership project between the City of Springfield and the Missouri Department of Transportation. Construction on the center began in January 2010. The Transportation Management Center of the Ozarks located 1111 W. Chestnut Expressway inside the Springfield Public Works Operations Center complex that was dedicated at a ribbon-cutting Wednesday, April 13.

Initially, the new TMC will provide “real time” oversight of the joint MoDOT/City signal system — more than 250 traffic signals and 42 traffic-monitoring cameras. Included are seven cameras positioned along I-44 in Greene, Webster and Laclede counties. (The state-city traffic management operation has been located in rented space since 1998. The first location was in The Discovery Center.)

The new TMC of the Ozarks is designed to expand its capabilities to remotely manage signals in other communities in MoDOT’s 12-county Springfield Region who choose to become a TMC partner, and it’s the nerve center for the Advanced Traffic Management System that will control the new equipment located along major City and MoDOT arterials and freeways.

The new TMC contains an 845-square-foot training room, which can function as an operations center for transportation emergencies or planned events, such as the temporary closing of a major roadway for construction. 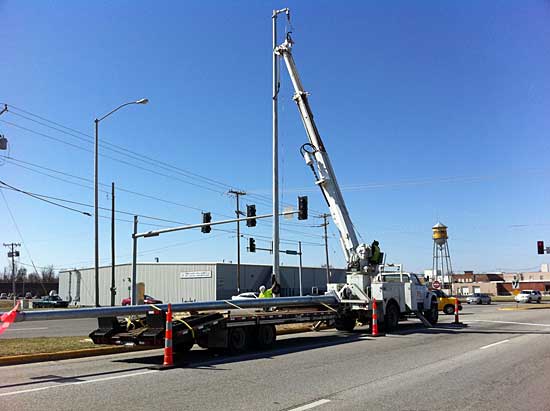 About the RDI Building

The RDI Building is a full service Class A office building located at 3003 E. Chestnut Expressway, Springfield, Missouri – conveniently near Hwy. 65 and just a few minutes from downtown Springfield.